Force of Nature is a slot game inspired by powerful events in nature: the earthquake, the flood, the thunderstorm, and the tornado.  Among the many fun features of this game, you’ll find a free spins round with sticky wilds.

The reels are set in a calm tropical landscape, but thunder is always lurking around the corner, and a storm can come sweaping in at any time, turning the sky dark and electrifying wild symbols to freeze them in their spot.

Examples of symbols that can appear on the reels when you play Force of Nature is Wind, Water, and Volcano. The Force of Nature logo is also a symbol and it always appears stacked.

Regrettably, the RTP is comparatively low, just 95.90%. This means that, over time, the house is taking a pretty big cut out of the wagers.

Can I play this game on mobile devices?

Yes. Force of Nature is a HTML5 game and works great on desktop computers, smartphones, and tablets.

The wild symbol can substitute for a regular symbol, but not for a special symbol.

The wild symbols can also pay out handsomely in their own right; get five wilds lining up nicely on an active payline and you will be awarded with 50x your bet.

The scatter symbol is a green tile with a twister. It is labeled “Free Spins”, because it is your key to the thundering free spins round.

This feature can be randomly triggered on any spin in the base game. The tornado will blow away a number of symbols from the reels and new ones will blow in to take their space. This gives you new chance to win.

This feature can be randomly triggered on any spin in the base game. A powerful earthquake will shake the reels, making two of them shatter and become completely wild. 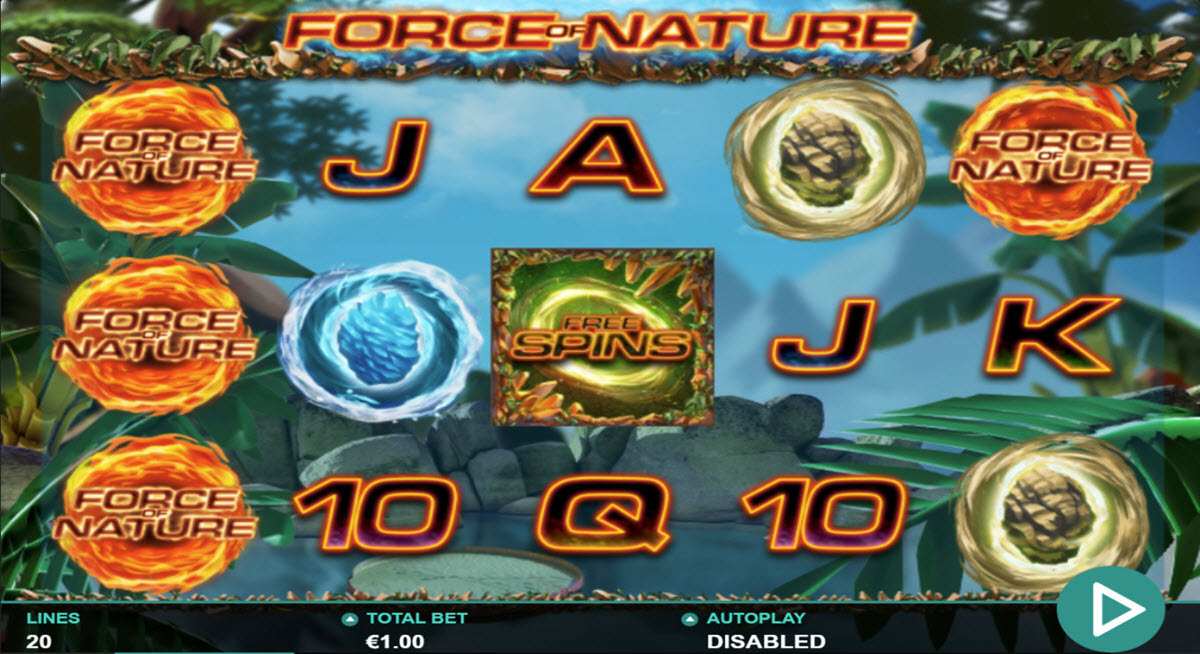 This feature can be randomly triggered on any spin in the base game. The flood comes sweaping in, leaving a trail of wilds in its wake.

To trigger the thunderstorm feature, you need scatters on the first, third and fifth reel.

The screen will darken as the thunderstorm draws nearer and you will be given 10 free spins.

Each time you get a scatter on the fifth reel during free spins, you get additional free spins. It is possible for the scatter to appear stacked.