Hail is a form of precipitation consisting of balls of ice or irregular lumps of ice. Each such ball or lump is called a hailstone and measures at least 5 millimeters in diameter.

The cloud type responsible for producing hail is the cumulonimbus cloud, i.e. the thundercloud. Hail is thus associated with electrical storms, but that doesn’t mean that we always find ourselves in a thunderstorm just because its hailing. Hail can be produced within 2 nautical miles (3.7 km) of the parent storm. 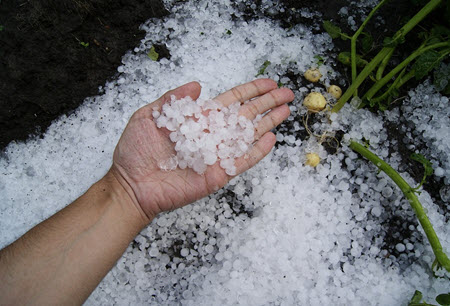 Even though thunderstorms are much more common in the tropics than in the rest of the world, hail is actually more rare in the tropics – especially at lower elevations. Still, the “hailest” place on Earth is in the tropics (but at a high elevation). It is Kericho, which is located in Kenya, close to the equator and at an elevation of 7,200 feet / circa 2195 meters. On average, Kericho experiences hailstorms on 50 days per year. During its record-breaking year, it experienced hailstorms on 132 days of the year.

Hail is more common along mountain ranges, because horizontal winds that hit the mountains side are forced to move upwards, and when this happens to a thundercloud it will intensify the updrafts that are already present within it. There is also less time for formed hailstones to melt before they reach the surface of the Earth. 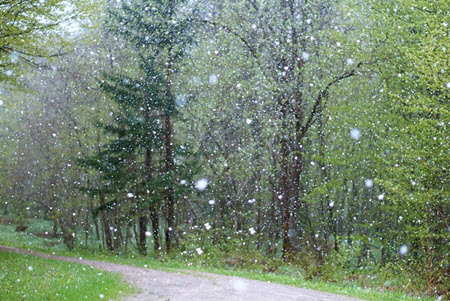 Northern India, which is a very mountainous region, is renowned for its frequent and often severe hailstorms. The mountainous parts of China also experience serious hailstorms comparatively often.

Canada’s Hailstorm Alley is located downwind of the Rocky Mountains, in south and central Alberta. Hailstorm Alley runs from High River northward through Calgary, through Red Deer to Lacombe and then westward to Rocky Mountain House. Not only are hailstorms fairly frequent here; they also tend to cause a lot of damage.

In Europe, Croatia, Serbia, southern and western Germany, eastern Benelux, and northern and eastern France are examples of hailstorm hot-spots.

In the United States, the most hail-prone area is where the states Colorado, Nebraska and Wyoming meet. This area is known as the Hail Alley. A majority of all hailstorms here occur in the afternoon and evening. Cheyenne is the hailest city in Hail Alley, with an average of 9-10 hailstorms per year.

Just like hailstones, ice pellets (known as sleet in the USA) is perceptional in the form of ice balls. Ice pellets are smaller than hailstones and are associated with winter weather rather than with thunderclouds.