A storm characterized by the presence of lightning is known as a thunderstorm. Alternative names are lightning storm and electrical storm. Thunder is the lightnings acoustic effect, i.e. the sound produced by lightning traveling through the atmosphere.

Thunder and lightning is often, but not always, accompanied by heavy rain and strong winds. Snow, hail or ice pellets can also occur, or no precipitation at all.

Thunderstorms form when warm and moist air is rapidly moved upward. As the warm air moves upward it cools down and the moist condenses, forming a cumulonimbus cloud. When the dew point temperature is reached, water vapor turns into water droplets or ice, causing a locally reduced pressure within the thunderstorm cell. Precipitation falls through the cloud towards the earth, and when droplets collide with each other, they merge and form bigger drops. Eventually, a downdraft is created that pulls cold air with it. The strong winds commonly associated with thunderstorms is this cold air spreading out at the Earth’s surface.

All thunderstorms go through three stages: developing stage, mature stage and dissipation stage. You can read more about these stages farther down on this page. Normally, each of these stages will last for around half an hour.

There are four types of thunderstorms: single-cell, multi-cell cluster, multi-cell lines, and supercells. 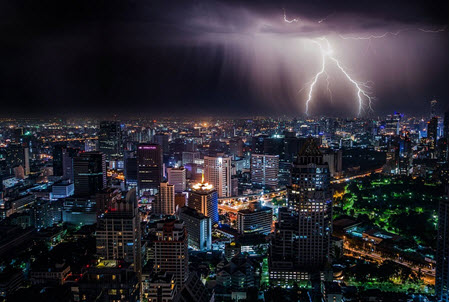 The type of cloud associated with lightning is called cumulonimbus, but not all clouds of this type produce lightning. Cumulonimbus clouds are dense, towering and vertical. They are formed by water vapor carried by strong upward air currents.

Cumulonimbus clouds are known to form alone, in clusters and along cold front squall lines. They have their origin in overdeveloped cumulus congestus clouds

In addition to being associated with thunder, cumulonimbus clouds are also capable of producing tornadoes if conditions are right.

The name cumulonimbus is formed from the Latin words cumulus (heaped) and nimbus (rainstorm).

Formation of a thunderstorm

During a downburst, quick and substantial changes in wind speed and wind direction can occur, making conditions precarious for aircrafts.