The term simoom is used for a strong and dust-laden wind that blows in the North Africa and Middle East region, especially in the Sahara desert and the deserts of the Arabian Peninsula, as well as in nearby Israel, Jordan and Syria. The name is derived from the Arabic word for “poison” (the verb, not the substantive). In Persian, the wind is called samiel. 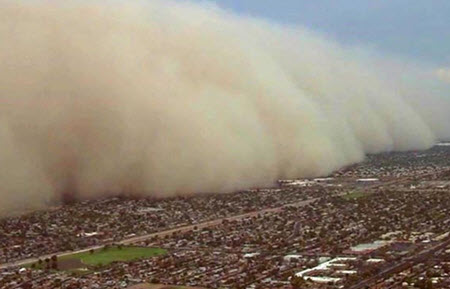 A simoom is very dry, sometimes with a humidity below 10%, and can get really hot. Temperatures above 55 degrees Celcius have been recorded, which is eqvivalent to 130 degrees Fahrenheit. Being exposed to the wind is dangerous and can cause acute ailments such as heat stroke, dehydration and breathing problems in both humans and animals.

A simoom moves in a circular form and carries with it ample amounts of sand and dust. It is formed as the desert ground is heated up by the sun when there are no clouds. The whirlwinds formed is believed to be a secondary result of the low-level thermic heating.

Fortunatelly, it will rarely last for more than 80 minutes, and many simooms will leave the area after less than half an hour. (Unlike the khamsin sandstorms which tend to plague an area for several hours.)

The simoons have a big impact on the desert landscape, as they reshape the sand dunes in late spring and in the summer.

Khamsin or khamaseen is a dry, hot and sand-filled wind in Egypt. Similar winds exist in other parts of North Africa and the Mediterranean, but under other names. 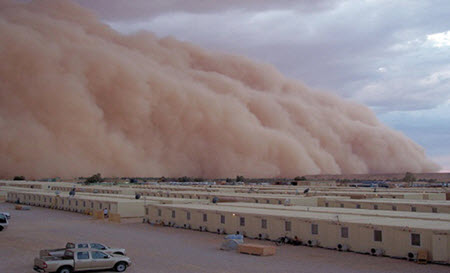 The khamsin plagues Egypt sporadically during a 50 day period in spring, which is why it has been named after khamsun, the Arabic word for 50. The first khamsin of the year typically arrives in April, but March khamsins have been reported as well. It is unusual to have more than one khamsin in the same week.

It is not unusual for the humidity to be below 5% in a khamsin. Speeds up to 140 km/h (87 mph) have been meassured, and the temperature can exceed 45 degrees C (113 degrees F). The wind carries with it huge amounts of sand and dust from the desert.

Unlike the abovementioned simoom, the khamsin will often last for several hours in the same area.