The tornado is one of the most feared weather phenomenons. It arrives with little or no warning and can leave vast destruction in its path. It is a rapidly rotating column of air that is in contact with the Earth’s surface below and cloud above. Almost all tornadoes are in contact with a cumulonimbus cloud (thundercloud), but on rare occasions it can be a cumulus cloud instead.

Alternative names for tornado are whirlwind or twister. Sometimes, the term cyclone is used in colloquial speech, but this can cause misunderstandings since meteorologist only use the word cyclone to denote weather systems where the winds blow counterclockwise around a low-pressure center in the northern hemisphere or clockwise around such a center in the southern hemisphere.

Landspouts and waterspouts are both different types of tornadoes, as are the multiple vortex tornadoes. Altough, since waterspouts develop over bodies of water, some scholars have suggested that they should not be classified as true tornadoes.

Examples of phenomena that are classified as tornado-like are dust devils, fire whirls, steam devils, and the gustnado.

The wind speed of a tornado is typically less than 180 km/h, which equals about 110 miles per hour. There are however examples of extreme tornadoes with a wind speed of over 480 km/h (300 mph).

An average tornado will not travel for more than a few miles or kilometers before dissipating. In extreme cases, tornadoes will form that travel over 100 km (60+ miles).

Tornadoes come in various sizes, but many are about 80 meters (250 feet) across. Extremely large tornadoes are sometimes more than 3 km (2+ miles) in diameter. 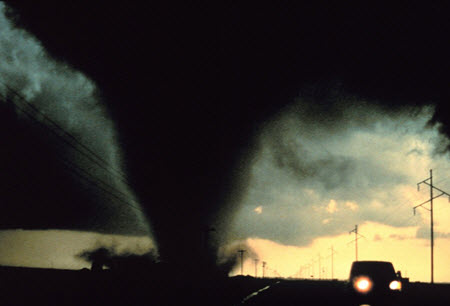 The ominous condensation funnel is a tell-tale sign of a tornado, but not all tornadoes form such visible funnels.

A condensation funnel is formed when water vapor in the air condense into cloud droplets because of adiabatic cooling. It is caused by the intense low pressure produced by the high wind speeds and rapid rotation. As droplets are formed, a funnel cloud becomes visible.

Tornadoes often start out as funnel clouds, but far from all funnel clouds develop into tornadoes. From a distance, it can be difficult to tell if you are looking at a tornado or “just” a funnel cloud.

Multiple tornadoes spawned by the same storm cell are called a tornado family.

Several scales are used for rating the strength of a tornado.

Where do tornadoes occur?