A storm characterized by freezing rain is known as an ice storm, since ice accumulate on exposed surfaces. In the United States, at least 1/4 of an inch of ice is required for the event to be classified as an ice storm. 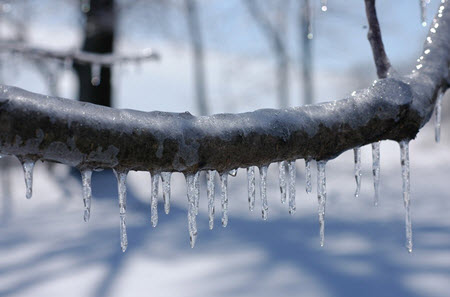 Unlike sleet (which is a mixture of rain + snow, ice or hail), freezing rain falls down as ordinary liquid raindrops that doesn’t freeze to ice until they reach a surface. While still in the air, the raindrops passed through a sub-freezing layer hundreds of meters above the ground, where they became supercooled. When a liquid becomes supercooled (also known as undercooled), it doesn’t become solid despite being colder than its normal freezing point. That’s because to become solid, a liquid needs a seed crystal or nucleus around which a crystal structure can form. If that is not present, the liquid phase can be maintained until the liquid gets so cold that crystal homogenous nucleation takes place. For water at standard pressure, this doesn’t occur until 224.8 Kelvin, which is roughly −48 °C/−55 °F.

During an ice storm, the supercooled droplets will freeze as soon as they hit any surface. It doesn’t have to be something on the surface of the Earth; an airplane or any other flying object will work just as well and will be covered in ice on all surfaces that the droplets can reach. If the ice re-shape the airfoil and/or flight control surfaces, a very dangerous situation can develop. 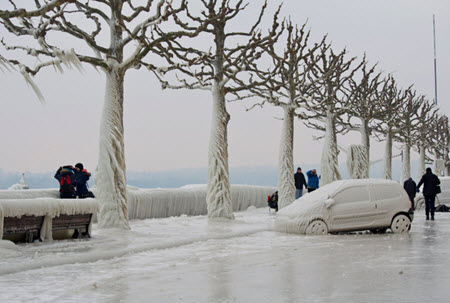 Ice storms can cause many problems down here on Earth as well, especially if the ice (which is called glaze ice) grow thick. During particularly severe ice storms, the ice sometimes accumulate to a thickness of several centimeters. Power outages are a common result of an ice storm; either because the power lines are directly damaged by the ice or because the ice makes trees or tree branches so heavy that they droop or break and causes damage to the electrical grid. In extreme cases, the ice have been heavy enough to break steel framed electricity pylons.

Driving on ice is always tricky, even with proper winter tires, and ice storms are especially dangerous since they can cause ice to accumulate on the road very quickly with little or no warning. Sometimes drivers are slow to understand what’s happening, since they see a gentle rainfall – not a blizzard or a hailstorm. Falling branches, trees and utility poles add to the trafic problems.

Modern meteorologists have become pretty good at understanding when conditions are about to form where there is a great risk for an ice storm, but once in a while unpredicted ice storms do occur.

In North America, Canada and northeastern USA are especially prone to ice storms, but they can occur in other regions as well. There was for instance a large ice storm in February 1994 that reached as far south as Mississippi and also caused severe damage in Alabama and Tennessee.

In January 1961, 8 inches of ice accumulation was recorded after an ice storm in northern Idaho. This is the record for ice thickness caused by a single ice storm in the United States.

The Great Ice Storm of 1998 was actually five successive ice storms in January that caused massive accumulative damages and at least 35 fatalities. The storms hit both sides of the USA-Canada border, from eastern Ontario to southern Quebec, New Brunswick and Nova Scotia in Canada, and from northern New York State to central Maine in the U.S.

The storms resulted in widespread power outages, leaving millions of residents without electricity, typically for a few days to a few weeks. In some areas, electricity was not restored until months after the storms. The region affected by the storms included major cities such as Canada’s capital Ottawa and Quebec’s largest city Montreal. In eastern Ontario and southwestern Quebec, over 3 million people were without electricity for up to a month and a half

Over 16,000 members of the Canadian Forces were deployed to help manage the situation, making it the largest deployment of Canadian military personnel since the Korean War.

The January 2009 ice storm hit several parts of southern United States were ice storms aren’t very common. All in all, seven states were hit by the ice: Oklahoma, Arkansas, Missouri, Illinois, Indiana, West Virginia, and Kentucky. The hardest hit area was western Kentucky, were over half a million residents lost power and over 100,000 had to wait more than a week to have it restored.

The ice storm resulted in 65 fatalities nationwide, of which 35 occurred in Kentucky. Many of the fatalities were caused by carbon monoxide inhalation, as people used power generators and kerosene heaters in unsafe manners.

The winter of 2009-2010 was unusually cold in Great Britain and Ireland, and included serious problems with ice glaze.

Much of the islands had been covered in snow during late December and early January, when on early January 12, an ice storm moved in. South and West Yorkshire in northern England were hit especially hard, with local hospitals and clinics being inundated by patients who had fallen and hurt themselves or been injured in traffic. Many schools had to be closed, since it was too dangerous for the pupils to get there.

The December ice storm in Moscow 2010

On December 25, 2010, the Moscow region of Russia experienced an ice storm resulting in power outages and numerous traffic incidents. Two power lines running to the Moscow Domodedovo Airport went down, causing a complete blackout of the airport and also stopping the connecting express railway.

Air traffic was re-routed to the two other main airports in the Moscow region – Sheremetyevo and Vnukovo – but they were shut down just a day later as the ice storm was followed by extremely heavy snowfall. Thus, Moscow suffered from an full air transport collapse.