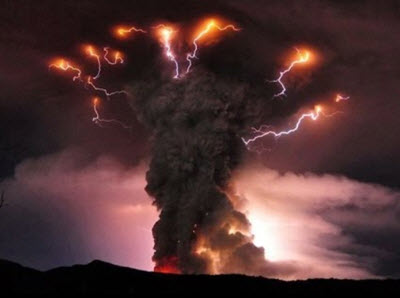 Volcanic lightning is a fairly common phenomenon during volcanic eruptions, occuring at around one third of all eruptions. In some cases, a very large number of lightning bolts can be seen. In one study by the University of Florida Lightning Research Program, one plume produced approximately 300 lightning bolts as it started going downwind.

One of the earliest surviving descriptions of volcanic lighting is from the Roman Empire, where the historian Pliny the Younger wrote about an eruption of Mount Vesuvius that took place in the year 79 AD. He described it as “(…) a most intense darkness rendered more appalling by the fitful gleam of torches at intervals obscured by the transient blaze of lightning.”

Some studies indicate that volcanic lightning might be more likely to occur when a volcanic eruption takes place during the winter season (after the autumnal equinox but before the vernal equinox). More research is needed to shed light on this. What we do know is that colder ambient temperature contributes to the creation of more ice inside the plume.

During a normal thunderstorm, ice particles collide in the thundercloud. In a volcanic thunderstorm, the air is instead filled with ash and other solid ejecta, such as rock fragments, although vapor, and sometimes ice particles, is present as well. A study performed by McNutt & Williams in 2010 showed that the water content in the volcanic plumes that they investigated was actually higher that the water content in a regular thundercloud. This was because such large amounts of vapor was released from the magma during the eruptions.

During a volcanic eruption, it is common for fragmented sub-surface rock to be ejected, and radioisotopes within these ejected rock particles may cause self-charging in volcanic plumes.

A study carried out on Iceland, where samples from Eyajafjallajökull and Grimsvötn were analyzed, showed that the volcanic ash had a higher level of natural radioactivity than the background level.

Plume height and the production of lightning

The height of the ash plume might impact the formation of lightning. More studies are needed, but so far it appears as if a large concentration of water vapor contributes largely to lightning activity in tall ash plumes (7 km or more), while smaller ash plumes (especially those that are no taller than 4 km) seem to gain more of their electric charge from fragmentation of rocks near the vent.