What is a whiteout?

A whiteout is a condition of diffuse light when no shadows are cast, due to a continuous white cloud layer appearing to merge with the white snow surface. No surface irregularities of the snow are visible, but a dark object may be clearly seen. There is no visible horizon. 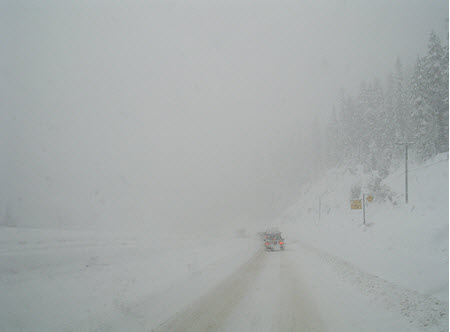 Since both visibility and contrast is severely reduced in a whiteout, navigating becomes very difficult, with even references points located nearby being impossible to see. As the horizon disappears, it is easy to get disorientated.

There are plenty of examples of people becoming lost even in familiar environments during a whiteout, such as in front of their own home.

Please note that conditions where you have a clear field of view for at least 9 metres (30 feet) do not qualify as a whiteout, even though they are sometimes referred to as whiteouts in colloquial speech if there is semi-heavy snowfall or a blizzard.

What causes a whiteout?

Extremely heavy snowfall rates can be enough to produce a whiteout.

During blizzards, snow already on the ground can be stirred up again by the wind, causing a whiteout even if the snowfall rate itself isn’t fast enough to cause a whiteout on its own.

If certain other factors are present, a whiteout can occur even without much of a snowfall. Examples of such factors are diffuse lighting from overcast clouds, mist or fog, or a background of snow. Ground-level thick fog in a snow-covered environment is especially likely to cause a whiteout in open areas without distinct features.

Local, short-duration whiteouts sometimes occur at airports and helipads where aircrafts stir up snow from the ground.