Watermelon snow is a type of snow that looks reddish or pinkish – just like the pulp of a watermelon – due to the presence of a certain alga that lives in cold water. If you disturb the snow, it can emit an odor resembling ripe watermelon. 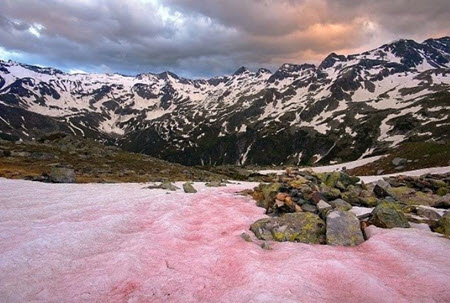 Watermelon snow is a fairly common phenomenon in alpine and coastal polar regions worldwide. In the United States, Sierra Nevada in California is renowned for its watermelon snow.

Untouched watermelon snow will typically look pinkish, but if you step on it or compress it in any other way, it starts looking red. Walking or skiing in watermelon snow can color your footwear and trouser cuffs red.

The main algae responsible for the look and smell of watermelon snow is Chlamydomonas nivalis, a species of green algae. This algae contains astaxanthin, a bright red carotenoid pigment. This pigment protects the chloroplast from intense sunlight; both visible light and ultraviolet radiation. The pigment also absorbs heat, which make the snow around the alga melt somewhat, providing the alga with the water it needs.

C. nivalis is a cryophilic species, which means that it thrives in low temperatures. In the winter, when it is covered in snow that makes nutrients and light scarce, the alga is dormant. In spring, a combination of melting snow, stronger sunlight and better access to nutrients stimulate it to wake up again and germinate. The alga releases small green flagellate cells that travel towards the surface of the snow. When such a cell reaches the surface, it may lose its flagellae and form thick-walled resting cells or, alternatively, function as gametes, fusing in pairs to form zygotes.

For this species, algal blooms can occur as deep down in the snow as 25 cm. Sometimes, the heat-absorbing red pigment absorbs so much heat that the surrounding snow melts enough to form so called “sun cups”, which are shallow depressions in the snow.

When a lot of C. nivalis is present, it can have a marked impact on the melting rate of snowbanks and glaciers. 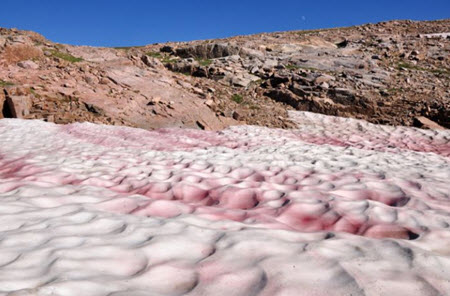 Snow that is red instead of white have of course always attracted the attention of humans. Up until the early 1900s, three reoccurring suggestions were pollen, mineral deposits or oxidation products leached from rocks, although the Scottish botanist Robert Brown (1773-1858) suggested back in 1818 that alga could be responsible.

One of the oldest surviving mentioning of watermelon snow is found in Aristotle’s writings, although he didn’t call it watermelon snow and he couldn’t explain the reason for its odd color.

In May 1818, four English ships looking for the Northwest Passage were forced to turn back due to unusually severe weather. As they were rounding Cape York on Greenland’s northwestern coast, crimson snow streaked the white cliffs like streams of blood caught the attention of Captain John Ross and a small group of men were sent out to bring back samples.

The samples, although melted, successfully made it to England where they could be investigated by Austrian microscopist Franz Bauer and Scottish botanist and palaeobotanist Robert Brown. Bauer declared that he had found an new species of fungus, which he called Uredo nivalis. Brown on the other hand said it was unicellular alga.

In December that year, there was an article about the crimson snow in The Times, stating that “The liquor, or dissolved snow, is of so dark a red as to resemble red port wine. It is stated, that the liquor deposits a sediment; and that the question is not answered, whether that sediment is of an animal or vegetable nature. It is suggested that the color is derived from the soil on which the snow falls: in this case, no red snow can have been seen on the ice.” In a new article a few days later, The Times printed the erroneous explanation that meteoric iron deposits were responsible for the coloration.

When Captain John Ross published his own account of the voyage, it contained a botanical appendix written by Robert Brown, and in this appendix, Brown tentatively attributed the red snow to an alga.

Researchers didn’t agree on the cause of watermelon snow until the early 20th century. Up until then, even those researchers who believed the coloration was linked to something alive (rather than just being a mineral deposit) couldn’t agree of that creature was a fungi, alga, lichen, plant or animal.

The alga was scientifically described from a sample taken from a snowpatch in the Cairngorm Mountains of Scotland in 1967.