The Philippines is often the unlucky country to receive the brunt of the force when a typhoon makes landfall, with Japan, China and Taiwan also receiving a considerable amount of typhoon winds.

When is the typhoon season?

Tropical cyclones form throughout the year, so there is not official typhoon season. With that said, a majority of storms in this region form between June and November, and the risk of typhoon development is much lower between December and May.

Just like other tropical cyclones, the six most important things for typhoon formation is:

Even if all these conditions are present, that doesn’t guarantee that a typhoon will form.

Roughly 85-90% of typhoons form within the monsoon.

The highest reliably-estimated sustained typhoon wind speed is 314 km/h (195 mph). This was for the Typhoon Haiyan shortly before it made landfall in the Philippines on 8 November, 2013.

The lowest reliably measured typhoon pressure was 870 hectopascals (26 inHg). This occurred with the Typhoon Tip in 1979.

Typhoon Morakot brought record-breaking heavy rain to Taiwan, after landing there at midnight on 8 August, 2009. Pingtun County received 2,327 mm (91.6 in) of rain.

It is difficult to reliably estimate the deadliness of typhoons that took place long ago, but the deadliest typhoon since the start of the 20th century was Typhoon Nina. In 1975, Typhoon Nina killed nearly 100,000 people in China as flooding caused 12 reservoirs to fail.

What’s the difference between a typhoon and hurricane? 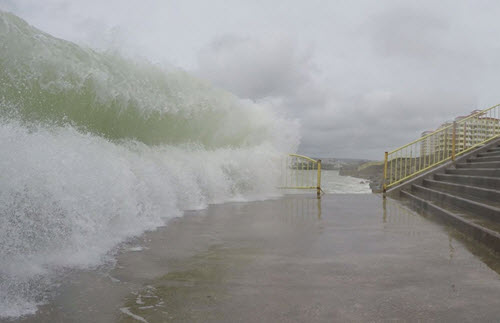 Different names are used for these violent storms depending on where they occur.

Sometimes storms are re-named as they move into a new geographical region. In 1994, Hurricane John did for instance end up being Typhoon John.

The word typhoon is derived from words used locally for these storms, especially tai fung from the Chinese language and ṭūfān from Urdu. Many different spelling variants have been used in English texts, such as touffon, tufan, tuffon, tiffoon, tay-fun and ty-foong.

How are typhoons rated?

The RSMC Tokyo’s Tropical Cyclone Intensity Scale is widely used to rate typhoons based on their intensity.